If you have a shower head that you just love and don't want to give it up. But at the same time you want to have filtered shower water. Then read on about how you can turn your hand held shower head into a shower filter in 5 easy steps! 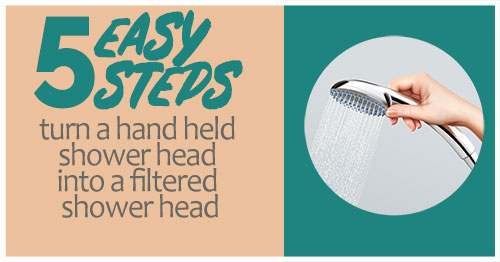 So you have an amazing hand held shower head in your shower?
It's just the perfect size, it gives you the perfect amount of even spread over your skin, it looks amazing in your shower, it fits perfectly in your hand, it just is exactly the shower head you always wanted and you'd be loath to even dream of cheating on it with any other hand held shower head! No siry!
Or, maybe you have a shower head that came originally with your shower unit itself. They both look amazing together, the shower head fits perfectly into the cradle and it's a pair, you would never ever think of separating them because then it just wouldn't look right.
Or, maybe you've spent hundreds of pounds on a hand held shower head, it took you ages to find the right one and it cost a lot of money! There's no way you are going to replace this shower head and you are going to definitely get your money's worth out of it! If you look online, some top notch shower heads can go for hundreds of pounds!

OK - so no matter which one of the situations above you are in, we get it. You've got the shower head of your dreams and there is no way you are going to part ways with it.
But at the same time, you really want to filter your shower water so that you can get the great benefits of showering in cleaner and healthier water every day.
You might be thinking to yourself that you can just put up with hard, unfiltered water that is full of chemicals, heavy metals and other contaminants because your love for your new shower head will override your need to swap out your hand held shower head for a hand held shower head filter.

Basically an in line shower filter gives you all the benefits of a shower filter: removes hard particles like magnesium and calcium and makes your water feel softer, stops so many white marks all over your shower surfaces, removes chemicals such as chlorine, chloramine, hormone and filters out things like heavy metals, kills bacteria and ensures that you are only showering in softer, cleaner filtered water. But the benefits don't only stop with overall health. Installing a shower filter actually will keep your beloved shower head cleaner and will make it last longer too. Have you ever looked at your shower head and seen all the hard water marks on the shower head, all the blocked nozzles and scale encrusted face and just wistfully signed to yourself and wondered what happened to that once beautiful shiny shower head you once originally bought that was so full of youthful luster and such promise? Well, if you have - as we have countless times - then you should know that by installing an in line shower filter all that junk that would normally get stuck to your shower head and cause you and the hand held shower head so much angst would be filtered out of the water BEFORE it reaches your shower head and it would all get stuck inside a replaceable cartridge that you just throw away once every 8 to 12 months. So not only will a shower filter keep you healthier, but it will help maintain your favourite shower head and keep it lasting longer, cleaner and in much better condition.

So here are our 5 easy steps to converting your standard (beloved) hand held shower head into a filtered shower head:

There are a lot of in line shower filters to choose from on the market, they all have many different shapes and sizes and many have lots of different filter mediums inside of them.
So the first step is the most important, because you really need to understand the type of water you have and what you're trying to filter out or what type of benefits you want to derive from your shower filter before you can make the best choice.

For example, if you look at our Slim Line Shower Filter this shower filter incorporates a cartridge that has multiple stages of filtration with around 8 different types of filter mediums inside. Ranging from KDF-55 (which is great for combating chlorine, heavy metals, scale and many other contaminants) to Vitamin C balls, which will infuse shower water with powerful Vitamin C which is proven to have great benefits to skin and hair.

If you're looking for a good all round shower filter that will do everything, then we would recommend this one.

When installing an in line shower filter, it will have to be installed between where the shower hose meets the shower water outlet pipe. Not at the opposite end where your shower hose meets your hand held shower head. Depending upon your shower there might not be much room to install a shower filter there. Especially in the case of electric showers where the unit is really up close to the tiles and the water outlet pipe is positioned just underneath the unit.

Step 3 - Remove the hose from the water outlet pipe

At this step you might need to use a little Teflon tape or a washer - you can get more information about that on our blog posts here:

Step 5 - Attach the hose onto the shower filter

So the last step is just as easy as step 4, now you just screw the hose (which has the 'female threads') onto the 'male threads' which is on the end of the in line shower filter.
Screw that up onto the shower filter, making sure you get a nice tight fit.

Once you've completed the above 5 steps, turn on the tap and flush some water through the shower filter for a few minutes.
Depending upon what type of filter medium is inside your shower filter, some of the filter medium that is not settled inside the cartridge might flush out of the cartridge and you may see it come out of the shower head. Don't panic, that's perfectly OK. After a few minutes all the unsettled filter medium will settle down and the water will run clear.

Here are some other in line shower filters which we have on offer at the moment which you might want to take a look at: 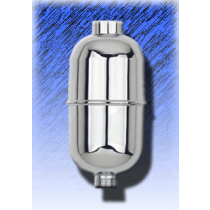 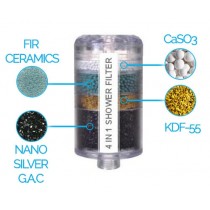 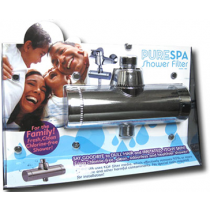 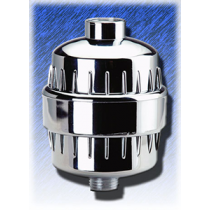