How To Stop Itchy Scalps With a Shower Filter 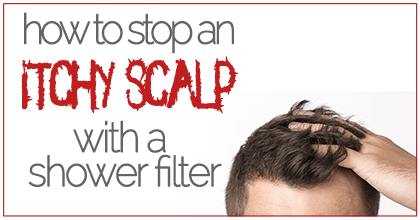 In this article we'll discuss how using a Shower Filter can help alleviate symptoms and the causes of itchy scalps.

Considering that itchy scalps are extremely common in adults (most of us will actually suffer from some type of itchy scalp at some point in time) there is still quite a stigma about scratching an itchy scalp. Perhaps this harks back to the days when we were in the play ground and having an itchy scalp made us social pariah because it was a symptom of head lice. Thankfully in the adult world of itchy scalps it usually does not mean we have head lice, but it may actually be indicative of a more low lying condition which our scalps may be suffering from.

Itchy scalps can be caused from a variety of conditions, to get to the bottom of how to solve the problem we'll look at the two most common causes of itchy scalps and how a shower filter can actually help stop the root cause of these problems and stop you from that itchy scalp.

Dermatitis can also be caused by irritated and sensitive skin. If we suffer from sensitive skin on our scalps, we generally will get itchy scalps often if we do not do something about it. In our showers themselves chemicals in shower water and also hardness in shower water can cause dermatitis. For example chlorine and chloramines put into shower water can easily cause dermatitis in those with chemical sensitivities. Hard water particles in showers are hitting our scalps are very high speeds and those micro particles are damaging scalp skin as they are bombarding us in the shower, this causes for the natural oil barrier in our scalp which is protecting our skin to break away and when this happens - we can get flare ups of dermatitis on our scalps and this leads to itchiness.

Another very common reason why we have itchy scalps is Seborrheic Dermatitis. This type of dermatitis most commonly effects areas of our body where we have a lot of sebaceous glands (those glands that produce natural oils to keep our hair and skin healthy). So this type of dermatitis actually isn't specifically located on the scalp, but the scalp is one of those areas of the body that produces a lot of natural oils so it is very common to have seborrheic dermatitis on there (other parts of the body that this type of dermatitis can form is around the face and torso). Seborrhoeic Dermatitis on the scalp will cause a sensation of itchiness and the skin that is affected by the dermatitis will become scaly, red and may even cause hair loss in some people around that area. Skin that is scratched a lot around that area can flake mildly and this can contribute to dandruff. One known cause of this type of dermatitis on the scalp is a fungus called Malassezia Globosa. This fungus is known to grow on the scalp and it produces toxic substances that can irritate and inflame the skin. One way to treat Seborrheic Dermatitis on the scalp is to use a medicated anti-fungal shampoo that can kill the fungus that is causing the dermatitis. Another way to combat fungus in our showers is to ensure we have a shower filter with KDF-55 (such as the Paragon Luxury Hand-Held Shower Filter Head), KDF-55 kills both bacteria and fungus in water as it passes through the shower filter - so it's a great way to prevent any fungus getting onto your scalp in the first place.

Many people experience eczema on various parts of their bodies. From their feet all the way up to their scalps, eczema can be prevalent anywhere. Eczema is an inflammatory skin condition that unlike seborrheic dermatitis (that generally only affects areas where the sebaceous glands are) eczema can appear anywhere, including on the scalp. When eczema is located on the scalp this can be extremely problematic for sufferers because a symptom of eczema is the continued over production and shedding of dead skin cells. This can cause some extremely adverse effects on appearance because people with scalp eczema may seem as though they are suffering from very bad dandruff with a lot of white flaky bits throughout their hair and falling on their shoulders. This gives the impression that the person is unclean, but in actual fact it is just their skin cells being over produced and the shedding and has nothing to do with their cleanliness at all. Modern science has yet to find the exact cause of eczema as yet. But there are some critical factors in helping people control their eczema. One of these factors is to ensure that people with this condition reduce the skin irritation wherever possible. People with eczema have sensitive skin so they should not have long hot showers, they should only shower in luke warm water. They should install a shower filter to remove irritating chemicals such as chlorine and soften water so that it does not irritate the skin on their scalps. When drying themselves after a shower they should also pat their hair dry, rather than rubbing their skin excessively. Also people with eczema should avoid chlorinated pools at all costs, the chemicals in the water will irritate their skin and cause accelerated shedding.

Having an itchy scalp or excessive dandruff does not mean that a person is unclean or unhealthy - it just means that they may be suffering from treatable forms of skin conditions on their scalp. So the next time you might be on a special occasion with someone and they scratch their heads a little too often. You can be safe in the knowledge that most adults will go through exactly the same thing as they are and you needn't judge them for it.

If you've come across this article because you're looking to stop that itchy scalp, then look no further than our great shower filters at PureShowers.co.uk or just drop us a line and we can discuss with you the best shower filter for your needs.