Simple Trick To Extend The Life of Your Shower Filter

In this article we will discuss how with this one simple trick, you can add months of life to your shower filter cartridge. 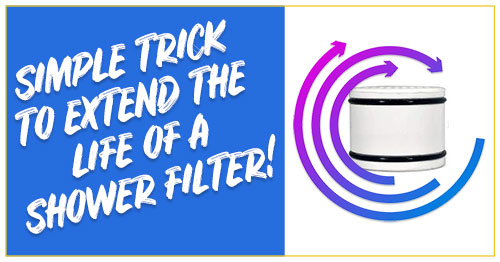 Shower filter cartridges can last anywhere from 3 months to up to a year. Depending usually on the quality of the water in your area and also how much you use it. So for example if you are living in a family of four people and you're all showering once a day, then the shower filter cartridge is obviously being used a lot more than if for example you were just a couple. In fact it would be used twice as much, so that would mean that it would run out twice as fast! On top of that, if the quality of the water in your area isn't very good and it's full of chlorine, lime scale and other contaminants - then the shower filter and the cartridge inside the shower filter is working really hard to remove those contaminants. Therefore it wouldn't last as long as a shower filter and cartridge which is being used in an area that has mainly softer water and a less contaminated water supply. For example if your shower water is being fed from an underground well water supply (which typically is very hard and full of hard water particles) compared to a municipal water supply, then you know that the shower filter cartridge is definitely going to need to be changed more often.

So what is this trick? Well, it's pretty simple and it's called; back flushing.

Sometimes customers email us and they ask us why their shower filter cartridge just isn't lasting as long as they would like and we always say to them, have you back flushed the cartridge? Nine times out of ten, customers will respond with something like, "what is back flushing?". So this isn't something that is common knowledge for shower filter owners, but it really should be, because it will save them money and also make sure that their shower filter cartridges are working at their prime all the time.

If we look up backflushing on wikipedia we get an article about backwashing, which is really just another way of saying backflushing. But wikipedia describes it as:

In terms of water treatment, including water purification and sewage treatment, backwashing refers to pumping water backwards through the filters media ... Backwashing is a form of preventive maintenance so that the filter media can be reused.

That description applies mainly to industrial water treatment filters, but we can follow the same principle in our own shower filters.

If we run water backwards through the shower filter cartridge, then what we are doing is flushing out any impurities that are trapped within the cartridge and therefore cleaning out the filter medium and making the filter medium work for longer.

The way to do this is to remove the cartridge from the shower filter and then install it in the opposite direction, then put it all back together again and fit it back onto our shower.
After putting it back together then we need to turn on the water supply as per normal, but don't stand under the water!, and allow the water to flow through the cartridge for around 5 mins.

This process will flush out any contaminants that are stuck inside the cartridge, cleaning the filter medium and making it so that it will last longer and be more efficient.

Unfortunately not all shower filters can be back flushed, because depending upon the design of the shower filter, it's not possible to install all cartridges in the opposite direction.

Luckily here at PureShowers.co.uk we have two models which can be easily backflushed, so here they are and also here are the instructions to do it for them: 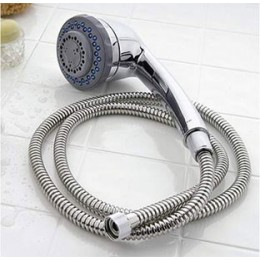 This shower filter can be very easily back flushed because the cartridge is easily flippable and also the filter medium inside it lends itself really easily to be being back flushed.

Step 1: Remove the cartridge as per the pictures below and just flip it so that it is installed in the opposite direction than before: 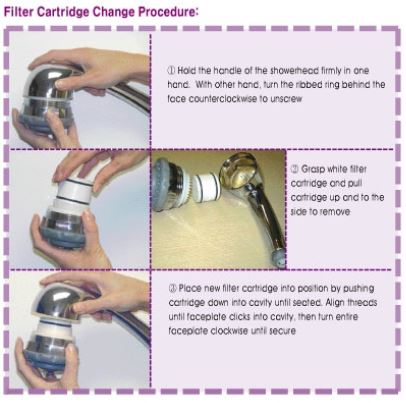 Step 2: Put it back onto the shower hose and run water through it for at least 5 minutes, not standing under the water.

This process should be done at least every couple of months and it will make sure that the cartridge will last as long as possible.
But unfortunately it will not make the cartridge last indefinitely because at some point the filter medium will get used up - so you really still have to change the cartridge at the very maximum every 12 months. 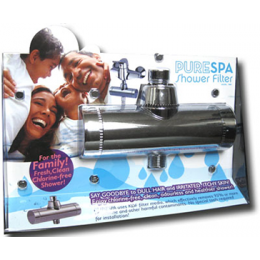 This shower filter isn't as easy to back flush as the Paragon one, but you can still do it without too much trouble.