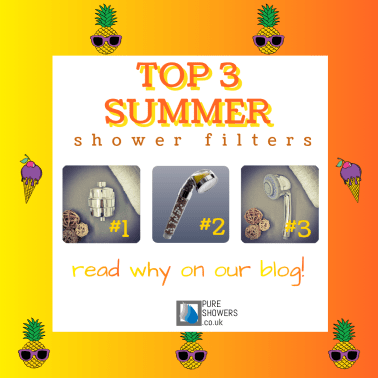 Some people love it, some people loath it - but no matter what you think about it, you can't get away from it.
It's summer in the United Kingdom and this year, it's a scorcher!


In early June we were already experiencing temperatures that were hitting the high 30s and the MET office are already predicting that we could have a heat wave in the later part of this July.

As the temperature rises and the mercury hits new highs on our thermometers, here at PureShowers.co.uk wanted to devote some time to looking at what are the top three shower filters for this hot summer and why we have given each of these that accolade.

We all know that shower filters are great for removing things like chlorine, chloramines, pesticides and other chemicals in our water supplies. We also know that a good shower filter will help to reduce the hard water particles in hard water and make it feel softer, but what specific qualities about a shower filter can we zero in on that makes it a top shower filter specifically for the summer months?

When it's hot and sticky people tend to shower more for a variety of reasons, maybe they're showering to keep cooler. Maybe they work outdoors or do manual labour and the extra heat is causing them to sweat more and therefore they need to shower more often. Maybe taking that second or third shower each day just makes people feel cleaner and refreshed. Either way, we all have been there, on a hot sticky day where the temperatures are hitting the mid to high thirties, we've had a hard day at work or with the kids and all we want to do is take that second (or third!) shower of the day in cold cold water just to feel better!

Showering more without a good quality shower filter means that we're exposing our skin, hair, lungs and whole body to contaminants in our shower water more often and therefore instead of only getting a lungful of chlorine inhalation each morning or our skin getting bombarded by harsh micro hard water particles once a day - we're actually doing it multiple times a day and wreaking havoc with our bodies. By the end of the season, if we've been showering two or three times more than usual without a good quality shower filter, we can be assured of issues with dry skin, dry hair, flaky scalps and a whole host of other conditions.

In summer the sun comes out and we spend a lot more time outside, soaking in the good vibes of the UK sun. Whilst this is generally a good thing, sometimes too much of a good thing can be bad for us and that definitely is the case when it comes to sun shine. In fact the UV light that is emitted from the sun can be extremely dangerous and it induces the production of free radicals in our skin, when we get sun burnt that is exactly what is happening, the UV light from the sun is creating oxidation stress in our skin and this in turn causes injury to the skin, which leads to wrinkles, lines, spots and other signs of aging.

What we need to look for in the best shower filters for this summer are shower filters that will remove high amounts of chlorine and other chemicals, some that will help to stop hard water particles to make the water feel softer and will help lather our soaps more so we don't have to use so much. We need to also look for shower filters that will add vital minerals and vitamins into our shower water, especially vitamins like vitamin c, which is one of the strongest antioxidants available on the market that will help fight against the oxidising effects of the high UV light bombardment during the summer months.

Armed with this knowledge, we've selected the top three shower filters that you should be using this summer:

With both of the above filter mediums combined, this shower filter will be protecting your skin, scalp, hair and lungs from the harmful effects of chlorine. Yet at the same time it will be putting back onto your body vital antioxidants that will help fight against the free radicals caused by UV rays that is caused by additional exposure to the sun during the summer months.

This shower filter comes in on the second spot, because it also incorporates Vitamin C but in a Vitamin C block instead of Vitamin C balls and also has Zeolite Stone balls which can effectively help to soften water.

The Vitamin C block in this filter stops Chloramines and Chlorine and the zeolite balls remove calcium and magnesium particles in hard water. A dynamic duo that will fight the sun's oxidising powers and which means that water will feel a lot softer on your skin, scalp and hair

This shower filter really is the Rolls Royce of shower filters. Because this shower filter incorporates the highest amount of KDF-55 it can remove huge amounts of chlorine, heavy metals and reduce hard water particles better than any other shower filter. By removing all of those contaminants shower water is left clean and pure and the chemicals that would usually be harmful to skin and hair are removed, leaving only natural water that feels softer and doesn't have any chlorine chemical smells. But specifically for summer usage, this shower filter was taken down a couple of spots because it doesn't incorporate any filter mediums that will fight the oxidising effects of the sun's UV rays.

So there you have it! The top three shower filters that are a must have for this summer season. We hope everyone enjoys the rest of the summer and if you have any questions or comments please do not forget to leave them in the comments section below.