If you rent your home, you can still enjoy the benefits of a healthier shower every day by installing a shower filter. But which shower filter to choose? Don’t worry, we’ve got you. Take a look at our top three best shower filters to install in your rented home.

We’ve been selling shower filters here at PureShowers.co.uk since 2008 and when we started our business one of the things, we always wanted to do was make buying and installing a shower filter as accessible as possible.

That’s why we have always only sourced and sold shower filters that can be used a point of use. We’ve specifically stayed away from sourcing or selling any types of water filters that customers would have to plumb in or that would need any real specialist knowledge to install.

We wanted to keep our products simple and easy, so that anyone can buy a shower filter from us and install it directly onto their showers and baths and realise the benefits of having cleaner more pure showers immediately.

In light of these considerations, we have always wanted to make sure that our shower filters are all accessible to people who rent their homes. When it comes to installing new bathroom and plumbing fittings and fixtures renters usually have different considerations and necessities. For example, a renter will need to ensure that whatever they change in their bathrooms can be reversed after their rental period is over. So, they can’t make any permanent changes to the homes they rent. Also, for simplicity, when renters want to change something in their bathrooms it should really be a simple change that they do not need to get permission from their land lord to make. A final consideration is that at the end of their lease, renters will want to be able to remove any type of new bathroom equipment and take it with them easily to their new accommodation.

Taking into account the above scenarios, we wanted to put together a list of the top three shower filters that we believe would be most suitable for renters and also the main features which makes these shower filters especially suitable. This one is for any renters who have bathrooms that don’t have an existing hand-held shower head and hose in it, but has a fixed shower head that is fixed onto a pipe instead.

For renters who are in this situation and think that it will be impossible for them to still install a shower filter, the 8 Stage Shower Filter is where it is at. That’s because this shower filter easily installs between the fixed shower pipe and the actual shower head. All a renter needs to do is remove the existing shower head from the pipe, this can be done easily without any need for special tools or plumbing knowledge. This can be achieved by simply twisting the fixed shower head anti-clockwise and unscrewing it from the actual shower pipe. Then when the whole shower head is off, you will see the threads on the shower pipe and that is where the 8 Stage Shower Filter can be installed onto. After that, it’s just a matter of screwing the shower head onto the opposite end of the shower filter and hey presto – instantly installed shower filter and pure softer healthier shower water every day.

Here’s a picture of what it looks like installed in one of our customers’ bathrooms: 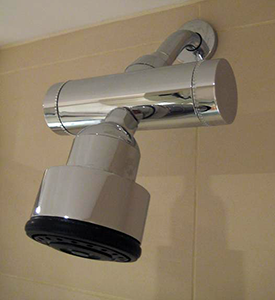 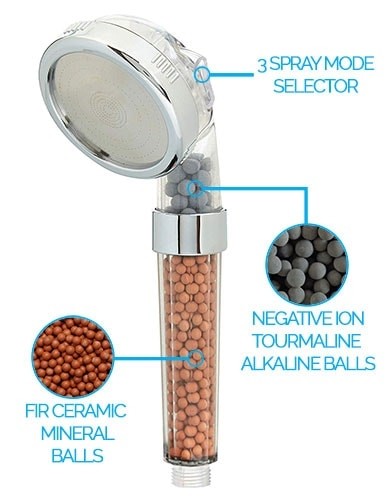 So, there you have it, our top 3 shower filters for renters.

We hope this article has been helpful for those renters out there who want to feel the benefits of installing a shower filter to keep hair and skin healthier and softer and want to live a healthier chemical free lifestyle.