What Are Negative Ion Shower Filter Balls and How Do They Work? 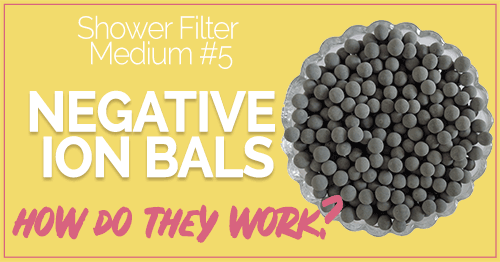 We've probably all seen those pink Himalayan Salt lamps in various home ware stores and alternative lifestyle stores, right? Maybe we even have one of them in our own homes. Most people have seen these but they probably just think it's a style trend for people who want to design their houses in a more rustic way. Well that might be part of the reason, but the primary reason people have pink Himalayan Salt lamps in their houses is because these salt lamps are actually producing negative ions when they're turned on and these negative ions pack a huge punch when it comes to health benefits.

These days in the Shower Filter and water filter industry it's not just about filter things out of water, there is also a lot of effort put into research about what beneficial things we can put back into filtered water and filtered shower water as well as what contaminants we can actually take out of the water.

In that vain of thinking many manufacturers and retailers of shower filters and water filters are starting to use Negative Ion Ceramic Balls in their filter products with some really positive results.

Negative ion ceramic balls are produced by mixing natural powdered anion with a highly porous ceramic and fired at high temperatures. This produces ceramic balls and due to the active anion and ceramic composite, each of these balls have thousands of pairs of naturally occurring electrode. As water passes through the balls they activate the water and produce negative ions inside the water.

This water that has been naturally activated and imbued with negative ions is very healthy for us, below is a easy to digest list of the health benefits which are known to derive from negative ions:

Negative Air Ions: Negative air ions have been studied for over 100 years now, studies have shown that they can increase psychological health, productivity, and overall well-being (https://www.ncbi.nlm.nih.gov/pmc/articles/PMC6213340/) - in fact they have been harnessed in air purification units for decades.

Beneficial For Mood: There have been many studies on how negative ions can improve our mood, with one study people with Seasonal Affective Disorder (SAD) were exposed to various degrees of negative ions and the result was that those who had a high level of exposure to negative ions actually had their levels of depression decrease (https://www.ncbi.nlm.nih.gov/pubmed/23320516).

Clear Headed Feelings: After a big thunderstorm many people experience a feeling of clear headedness and contribute this feeling to the large amount of negative ions left over after the thunder storm

Higher serotonin: Serotonin is the chemical produced in the body which gives makes us happy, some studies in rats and mice have shown that exposure to higher amounts of negative ions increases serotonin levels.

Better Sleep, Reduce Stress, Boost Immune Systems: Just in 2018 a large peer review of many studies conducted about the health benefits of negative ions found that they had a really large impact on our well being and the way our bodies functioned.

If you're looking for a new shower filter which incorporates the power of negative ions, then here at PureShowers.co.uk have two shower filters for you: