What Is a Fixed Head Shower Filter?

Ever wondered exactly what a fixed head shower filter is? How is it different from other shower filters? Why is it better (or worse?). Well, wonder no more and read this article. 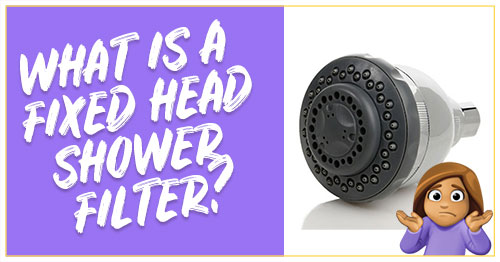 These replaceable filters can have a variety of filter mediums inside, such as; KDF-55, Granular Active Carbon, Ceramic Filter Balls or some other water filter medium. Tap water can contain many harmful impurities, such as chemicals like Chlorine, heavy metals, pesticides, THMs, hard particles such as lime, magnesium, calcium and many other impurities. These impurities and additives can be really harsh on the skin and hair and cause a plethora of different ailments, from eczema to dry skin and hair conditions. It has been proven that breathing in Chlorine fumes inside of a shower is actually more harmful than drinking chlorine in water itself, because the chlorine inside tap water turns into chlorine gas and can cause damage to the lungs. Therefore as tap water passes through a fixed head shower filter and passes through the cartridge inside of one, the filter cartridge removes many of these toxins and results in you showering in crystal clear filtered water.

Here's two pictures of a some fixed shower head filters and how the cartridge inside works:

That's all for today, we hope you got something out of this article and if you have any questions or comments please do not hesitate to email us or leave your comments in the comments section below.