Will A Shower Filter Fit Onto My Existing Hose?

You want a new shower filter - but you're not sure if it will fit onto your existing hose? We've got the answers you're looking for! 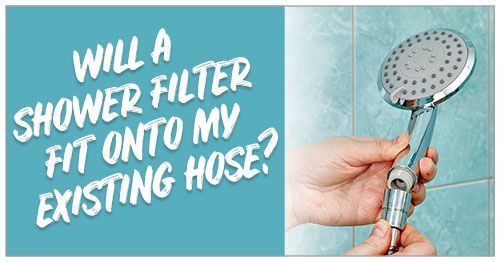 Shower Filters come in many different shapes and sizes, then on top of that, they come with a plethora of different filter mediums inside of them as well. So sometimes when we're looking to buy a new shower filter it can get a little daunting. On top of the shape and size and exactly what is inside the shower filter, customers also have to ensure that when they buy a shower filter it will actually fit inside their showers as well.

That's why we wanted to go ahead today and write an article about whether or not a shower filter will fit onto the existing hose in your shower and then give you a little further information about exactly how you go about identifying the a shower filter that would fit directly onto your hose and how you would actually do that.

So you've got a hand held shower head at the moment and you've read all about the benefits of having a shower filter, you know, like; bathing in crystal clear, chemical free water that's healthy for you and your family. You've read about how shower filters remove contaminants like heavy metals, chlorine, bacteria, reduce the hard water particles in your shower so that it doesn't damage your skin or leave white marks all over your shower surfaces. All that good stuff! So now you just want to get a shower filter and don't want to have to fuff around too much with any plumbing tools, wrenches, screws and any of that malaki. Well, getting a hand held shower filter that has a water filter inside the actual shower head or the shower handle itself is the easiest solution and the fastest and simplest ways of feeling the benefits of a shower filter and installing one in your shower.

These types of shower filters are a really good solution because they will always have some type of water filter cartridge inside the shower head or handle itself. These cartridges can last anywhere from 3 to 12 months, depending upon how much filter medium is inside the shower filter cartridge and also the type of filter medium itself. But the great thing about the cartridges is that, when they run out then all you have to do is take the cartridge out of the hand held shower filter and you just replace it with a new cartridge. So you don't need to continually buy a new shower head each time, you just remove the cartridge. That saves a lot on waste and also saves a lot in the back pocket!

Whether you decide to go with a shower filter with a new hose or a shower filter without a hose, what you really want to know is will that nifty new shower water filtering device actually fit onto your existing shower? Well the good news is that in the last 10 years we've been providing shower filters to our thousands of happy customers, we have never had a situation where one of our shower filters does not fit onto a customers existing shower hose! As far as we know, there isn't some universally published standard out there for shower hoses - but it just seems that all shower head manufacturers seem to make shower hoses in the same thread size, which is 1/2 inch BSP (British Standard Pipe) thread size. So if you already have a shower hose in your shower, then when you get a new hand held shower filter, you will be able to screw it directly onto your existing hose. If you get one that has a new shower hose, then you can be guaranteed to be able to swap out that old shower hose for your brand new shower hose and fit your new filtering shower head directly onto that new hose.